I knew little about the Hayes family when I was growing up. Dad never talked about his family much. We did not know any Hayes relatives. We knew the bare bones of Dad’s life story: that he was born in Wirrabara in 1916, the first child of William Michael Hayes and Catherine Veronica Kennedy. His parents owned a picturesque farm on rolling hills a few miles north-east of Wirrabara. The farm was bequeathed to William Michael by his father, Patrick Hayes on the occasion of his marriage in 1915.

The ruins of the Hayes farm near Wirrabara, built by my great grandfather Patrick Hayes (1840-1918). My father spent the first 14 years of his life here.

This blog post is not about my father or grandfather,  but about the Irish origins of my great grandfather Patrick Hayes and his parents before him.  Patrick arrived in South Australia as a nine year old boy on the ship Eliza on 23 August 1849. As a child born in 1840 he probably witnessed many harrowing sights during the Famine.  In his later life he signed legal documents with his “X” mark, so we assume he was illiterate. There was probably little opportunity to get much education after he arrived in South Australia. As a very young man he worked as a ‘bullocky’ carting copper from the mine at Burra to Port Wakefield. He married my great grandmother Catherine O’Toole in Mintaro in 1865 and they raised twelve children. My grandfather, William Michael, was the youngest. Patrick became a land-owner and lease-holder in the region around Wirrabara and Melrose. His is a remarkable story of hard work and achievement against the odds.

With Patrick on the Eliza were his parents Thomas Hayes and Honora Hennessy, his sister Mary aged ten and infant brother Thomas. The passenger list states that they were from County Galway, and Thomas’ occupation was given as a “husbandman”. That is all I knew about their Irish origins.

I began my search with the history of the surnames Hayes and Hennessy. In mid-19th century Ireland these names were not common in County Galway. They were mostly clustered in County Cork, followed by counties Tipperary and Limerick. 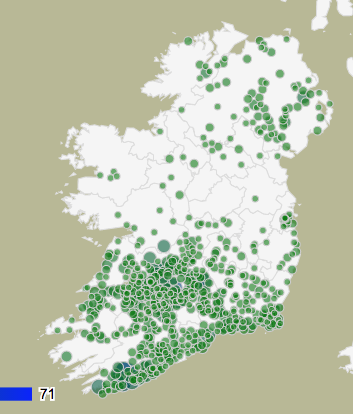 When searching historic land records, I had a great stroke of luck: there was only one Hennessy name in County Galway, that of Pat Hennessy, who lived in the townland of Derrygoolin, Civil Parish of Ballynakill/Catholic parish of Woodford in 1834. He was a tenant of the Marquis of Clanricarde and occupied 160 acres of land.

I next discovered that Michael, William and John Hayes were also tenants of the Marquis of Clanricarde in the same townland, each with 80 acres. Derrygoolin is located about 3  miles south west of the village of Woodford. County Clare forms the southern boundary of the townland and Lough Derg is to the east. Derrygoolin is in the foothills of the Slieve Aughty mountains which form the boundary between County Galway and County Clare. The hills of the Slieve Aughty range contain vast tracks of some of the most desolate landscapes in Ireland. The highest point in the townlanland is 669 metres. The Slieve Aughty Bog, now a protected conservation area, is not far away from Derrygoolin. 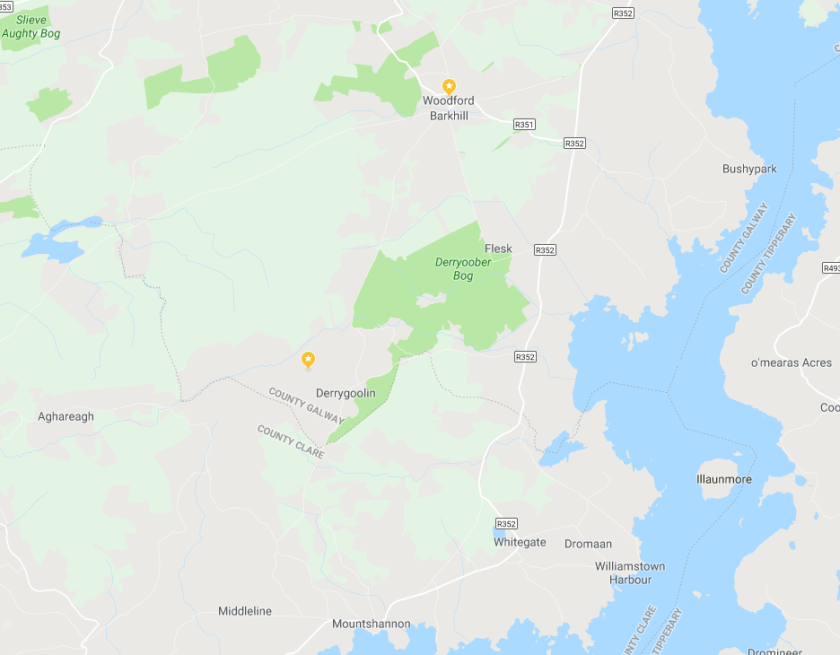 The townland of Derrygoolin, 3 ¼ miles SW of Woodford

I was hopeful that I was on the right track in my ancestral search. I next examined  the Catholic parish records for further evidence that this was in fact their place of origin. I did not find a marriage record for Thomas and Honora but I did find a baptism record for their son John who was baptised on 6 February 1842 in the Catholic parish of Woodford. This infant did not survive the Famine years but his date of death is unknown.

The Hayes and Hennessy families were tenants of the Marquis of Clanricarde, Ulick John de Burgh (1802-1874). The history of this family dates back to the Norman invasion of Ireland in the late 12th/early 13th century. The de Burgh family, or Burkes as they later became known, succeeded in subjugating the local Gaelic population and at times they dominated the whole province of Connacht. Much has been written about this family and their historic role over the centuries. In Woodford at the time my ancestors lived there they were one of the leading landowning families in County Galway, with 52,000 acres. A book has been written about the Earl of Clanricarde, A Galway Landlord during the Great Famine. He staunchly defended the interests of the landlord class during the Famine, but did not entirely ignore the misery of his tenants.

The quality of the land my ancestors occupied was very poor. A total of only seventeen families lived there. In the mid 19th century Derrygoolin townland was described as

A large townland very partially cultivated being composed of bog and mountain. There are only a few cabins of a very inferior description in the townland. There is nothing remarkable in the townland.

In this harsh landscape it must have been difficult for these families to eke out a subsistence livelihood, even in the good years. What it was like during the Famine is hard to imagine. There is a Workhouse in nearby Portumna which I hope to visit when I am in Ireland, but as far as I know none of my ancestors had to enter the Workhouse.

Galway suffered severely during the Great Famine. Over 73,000 people died in the County between 1845 and 1850 and approximately 11% of the population emigrated in the succeeding five years. Between 1841 and 1871, the population of the Clanricarde estates in Galway fell from nearly 22,000 to under 10,000. In the aftermath of the Famine, the land agents of the Earl of Clanricarde promoted the assisted emigration of his tenants. There are no records for the individual tenants who left. Nor is it known what assistance the land agents gave the tenants to leave: whether the estate paid part of the fares or assisted the tenants to successfully apply for a government assisted passage. There are no records to indicate if the estate assisted the departing tenants with the cost of equipping themselves with the required outfit of clothing, other sundry expenses, or the cost of reaching the port of embarkation.

The lives of Thomas and Honora after their arrival in South Australia are another story. Briefly, four more children were born. We know from the children’s baptism records that the family were living in Kapunda. It seems highly likely that Thomas worked as a labourer in the copper mine in the years immediately after their arrival. He must have worked hard, for on 3 December 1858 he bought his first land in the colony, 168 acres in the Hundred of Belvidere, County of Light. This land is just on the outskirts of Kapunda. In 1873 he purchased 312 acres of land near Caltowie in the mid-north. Thomas died in Caltowie in 1887. Honora lived to the age of 85, taken care of in her old age by her daughters Catherine and Bridget who were born in South Australia. She died in 1899.

While they no doubt endured much hardship in their lives, I would like to think Thomas and Honora felt a sense of relief and security when they bought their own land in South Australia. No longer would they or their children be at the mercy of an absentee landlord, at risk of eviction or starvation. I have visited their final resting place in the Caltowie cemetery. I now look forward to seeing where their journey began, Derrygoolin townland in County Galway. 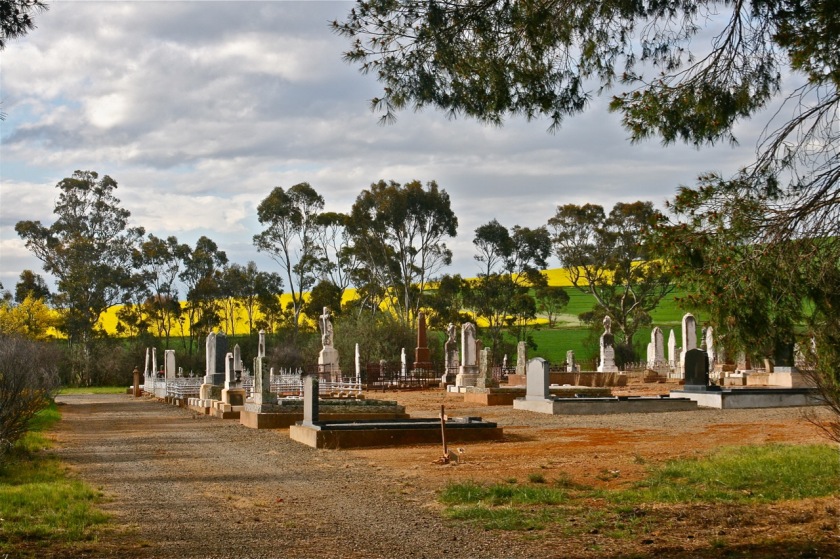 Caltowie Cemetery,  where Thomas and Honora and some of their children are buried.

5 thoughts on “The Hayes family from County Galway”

Bernadette Thakur and https://hayesdempseyfamilystory.wordpress.com. 2017 and ongoing. Unauthorized use and/or duplication of this material without express and written permission from this site’s author and/or owner is strictly prohibited. Excerpts and links may be used, provided that full and clear credit is given to Bernadette Thakur and https://hayesdempseyfamilystory.wordpress.com with appropriate and specific direction to the original content.